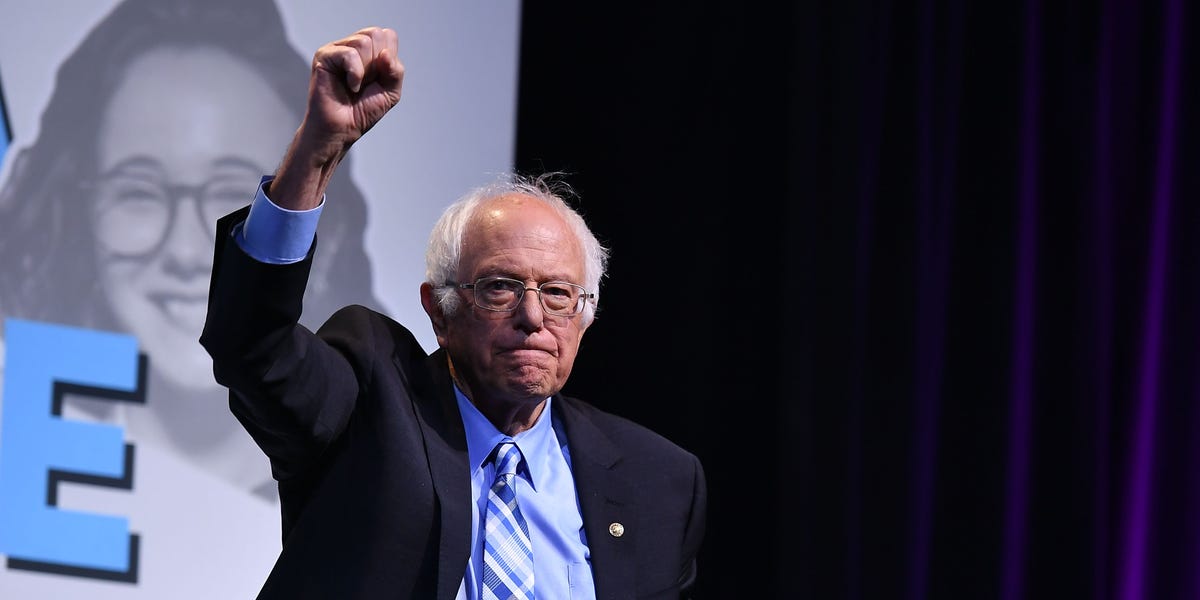 Before a crowd of almost 100,000 people at a packed football stadium in Philadelphia, a Democratic presidential candidate pledged to seize power back from the “economic royalists,” arguing that financial and business interests had amassed too much influence within the government to the clear detriment of the middle class.

“What they really complain of is that we seek to take away their power,” the candidate said. “Our allegiance to American institutions requires the overthrow of this kind of power.”

This fervent anti-business rhetoric echoes what’s been heard in the 2020 Democratic primary. But the comments were actually made by President Franklin Roosevelt in July 1936, when he accepted the Democratic presidential nomination.

Still, the language wouldn’t be out of place in today’s heated political environment.

The super-rich and Wall Street have become useful fodder for Democratic candidates seeking to establish their progressive credentials and contrast themselves with rivals in a large primary field. Sens. Bernie Sanders and Elizabeth Warren are driving the shift, harnessing lingering anger among the public towards financial institutions and the wealthy a decade after the 2008 financial crisis.

“It’s not that surprising that billionaires have become a target in 2020,” Rebecca Katz, a progressive political strategist, told Business Insider. “If anything, it’s surprising they’ve escaped scrutiny for this long — with income going to the top one percent and wages stagnating for working people.”

The animosity on the campaign trail is reaching levels not seen since the aftermath of the Great Depression.

A poll released earlier this month from the nonpartisan group Americans for Financial Reform found that there was overwhelming support among Democrats, Republicans and independents — 80%, 65%, and 72%, respectively — for more muscular government regulation of Wall Street.

Both Warren and Sanders have spurned attending lavish fundraisers in favor of generating excitement and drawing individual contributions to cement their candidacy’s image as a movement energized by the middle and working class.

Warren has also rolled out a plan to impose a 2% tax on households with a net worth above $50 million and three percent on net worth above $1 billion. And Sanders put forward an even more aggressive plan that would cut some billionaires’ wealth in half over 15 years.

The mounting willingness to tackle inequality comes after several decades of wealth becoming increasingly concentrated near the top of American society. Research from economists Emmanuel Saez and Gabriel Zucman found that the richest 400 families controlled more wealth than the bottom 60% of wealth distribution — or 150 million adults in the US. They’ve also recently said those same households are paying a lower tax rate than the working class.

“The time is ripe for a Democratic candidate to take on corporate America, Wall Street and Big Tech,” former Labor Secretary Robert Reich told Business Insider. “It’s not just Democrats who are suspicious and distrustful, its also working class Republicans and many independents.”

“No one is supporting billionaires”

Biden echoed that. “No one is supporting billionaires,” he said.

Sanders and Warren, though, have emerged as the progressive favorites and both are competing for the same ideological lane of voters eager to drastically remake American capitalism and curb the political power of corporate America.

Sanders in particular has invoked Roosevelt to defend his vision of democratic socialism and the “economic rights” he believes it is capable of delivering for the American public. Back in June, Sanders said in a speech that “we must take up the unfinished business of the New Deal and carry it to completion.”

Roosevelt campaigned in 1936 on protecting the New Deal, a sweeping set of reforms that stabilized the nation’s banking system, put stricter regulations on Wall Street, launched colossal infrastructure projects and raised wages after the 1929 financial crash.

That invited the fury from Republicans who charged him of gross overreach and subverting the Constitution. Though Republican candidate Alfred Landon agreed with elements of the New Deal, he criticized it as being overly hostile to business.

But Roosevelt was unswayed and reveled in the barrage of attacks. “FDR loved a good fight,” Reich said.

Instead, he defended his New Deal as a barrier guarding “the average American against the predations of the rich and powerful,” wrote University of North Carolina history professor emeritus William Leuchtenberg for the Miller Center, a nonpartisan affiliate for presidential scholarship at the University of Virginia.

The American Liberty League — a political organization mostly funded by wealthy business elites — marshaled the opposition against the 32nd president. Roosevelt famously said of his well-funded political rivals at the time: “They are unanimous in their hate for me — and I welcome their hatred.”

“Where FDR was particularly smart was to take advantage of the business opposition to him,” Reich said. “He used it to make the point they were united against him because he was trying to effectively regulate capitalism.”

Roosevelt won the 1936 election by huge majorities in both the popular vote and the electoral college, powered by a new coalition of voters made up of small farmers, labor union members, Catholics, as well as urban black voters.

Still, the corporate opposition Roosevelt confronted is reminiscent of the attacks both Sanders and Warren have drawn from some in corporate America — and how they’ve similarly tried using it to cement their image as fighters for middle and working class Americans.

Sanders has repeatedly pointed to remarks from former Golden Sachs Chief Executive Lloyd Blankfein saying his candidacy “has the potential to be a dangerous moment.” And the Sanders campaign website features a list of “anti-endorsements” from “the modern oligarchs who oppose our movement.”

Warren has also drawn significant fire from corporate leaders. Mark Zuckerberg, Facebook’s chief executive, said in leaked audio earlier this month the company would “go to the mat” to prevent the social media giant from being broken up — which Warren proposed to better regulate technology companies. Her campaign put the audio in an ad highlighting attacks from the business community.

Reich said both Sanders and Warren have an opportunity to run similar campaigns in mold of Roosevelt over eight decades ago.

“When CEO’s on Wall Street today say they’re afraid of either Warren or Sanders.. all of this is potential fodder for a presidential campaign like FDR’s in 1936,” Reich said.

Whether that strategy would pay off against a volatile opponent like President Donald Trump and the Republican campaign apparatus remains to be seen.